Bing is to take over from Live, which has powered MSN search since 2006 and officially launches on 3rd June 2009. It's billed by Microsoft as "a decision engine" and not a search engine, although to all intents and purposes it is one - it works like one and behaves like one, so as in ducks, it is one, regardless of what the marketing people would have us believe.

But is it good enough to take on the mighty Google?

Probably not. As nice as it is to use, It would probably take a technology revolution to break Google's current domination of the web search arena, and Bing is most definitely not that. But it does have some nice added features that might win over some of those who are aware that there are other search engines than Google. In particular the way quick links to related search "topics" are shown on the left of your search results, and expanded snippets and page links are popped up on the right when you mouse over the icon on the right really do help refine your search quickly.

But these are mostly refinements of what has gone before, and Microsoft are so far behind in the race that Google will be able to cherry pick off the best features to keep their advantage long before Bing threatens too many inroads into their market share.

So, credit to Microsoft for what looks like a big step forward, but unfortunately I don't think its enough of a challenge - which is a shame, as Google's dominance of search, particularly in the UK is very unealthy indeed, and we as marketers would love to see the real competition in the marketplace that is currently lacking.

Why not give Bing a try for yourself: www.bing.co.uk

To make it easier for you to keep track of how your web site is doing in the search engines, we have launched a new online ordering / subscription service for SEO visibility reports.

Visibilty reports show you the position of your site in the major search engines for your chosen key search phrases, and our reporting system helps you keep track of where your site is ranking. Our reports give your a snapshot of your current position, and show the position trends for each key phrase from report to report.

You can either check positions on an ad-hoc basis, or sign up to an annual subscription to receive monthly reports. Prices are from £30 ex VAT for a one off report (additional follow up reports £17.35), and £180 for a 12 month subscription. 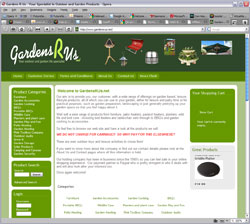 Gardens R Us have just launched a new eCommerce website. One of our low cost range of websites, the site is based on the Joomla CMS with the VirtueMart eCommerce store.

It uses the Joomlashack Jamba template with modified header graphics and a tweaked VirtueMart shop theme.

You may have noticed that the EU has started proceedings against the UK Government for failing to take action against adware company Phorm which it believes infringes EU (and in turn UK) privacy protection laws.

So why is this such a big deal? Well, the main difference is that ad tracking in the past has largely been focused on tracking the delivery of of adverts and users actions when they click on those ads. In terms of data gathering all fairly innocuous stuff.

But in the case of Phorm, it goes much beyond that - aided and abetted by ISPs like BT, the Phorm system doesn't track ads at all - it tracks YOU.

Using Deep Packet Inspection (DPI) technology installed on your ISP's servers, Phorm tracks you everywhere you go, and builds up a profile of your interests, likes, and dislikes. This allows them to sell advertising space to advertisers seeking advertising targets with your profile.

Some might argue that that's not a bad thing - after all it might be better that they deliver ads that are of interest to you rather than adverts that aren't. That seems to have been the argument that won the day when the City of London Police interviewed representatives of BT about a secret trial of debateable legality back in September 2008.

However, since then the detail of what Phorm are doing, and the nature of their "partners in [alleged] crime" has become clearer, and at the same time a little grubbier. Phorm's claims that their technology "is fully compliant with UK legislation and relevant EU directives" and that "This has been confirmed by BERR and by the UK regulatory authorities" has been somewhat diminished as the EU, the UK Data Commisioner and the UK Department for Business, Enterprise and Regulatory Reform (BERR) have all come out stating that in their view Phorm are in breach of data protection and privacy law. Heavyweight denial indeed.

Most worrying is the position of certain large UK ISPs including BT, Virgin Media, and Talk Talk. All of these have been collaborating with Phorm in the development of the system - BT having completed several illicit trials of the technology.

This adds a whole new dimension when it comes to choosing your ISP - not only do we have "how much", "how fast", but "are you going to spy on me?". To be fair to those ISPs, they have come out and explained their opt-in and opt out policies in relation to the Phorm service, although BT's persistant opt-out approach would seem to be in contradiction of the Information Commissioner's ruling in April 2008 that Phorm's proposed offering would only be legal if it were opt-in.

So should we be worried? As a marketing company, the idea of being able to target potential market segments is highly attractive. But as an internet user, it's a different thing altogether - do I want my ISP (that already knows exactly who I am, where I'm going and what I'm looking at at any given time) to have a vested interest in passing that information on to a 3rd party for profiling? Furthermore, can that 3rd party be trusted?

One has to question the integrity of any company (BT) that persists in an opt-out approach to such a system in full knowledge of the Information Commissioner's ruling, and in the face of police interest, and a system provider that has shown a certain disregard for accuracy in its recent public statements, and I for one am not convinced. I want my ISP to be providing ME with a service, keep my data secure and private, and not be selling it on. I opt OUT thank you.

Want to know more about the technology and issues?

After  much beta testing, Microsoft has finally launched its latest version of Internet Explorer, version 8.

The launch of a new browser from Microsoft is normally a source of some despair from web developers everywhere (oh, no they cry, now THREE IE browser versions to "work around"). Well actually, in this case it's not so bad, as IE8 is probably the most standards compliant browser that Microsoft have produced, and sites that display correctly in rival browsers Firefox, Opera, and Safari seem to appear much the same in IE8. Perhaps it's a bit of self inditement that IE8 includes a "Compatibility mode" intended to correct some of the display errors that arise where sites have been designed to suit earlier, and less W3C standard compliant, versions.

Most general users won't notice much difference from IE7 - slightly more compact graphics and toolbars that take up less screen space, and a less minimalistic approach to the toolbars on display, but go in a little deeper and there's quite a few improvements with the inclusion of developer tools and other fatures that have been included in other browsers for some while.

Overall an improvement, and worth upgrading. But not perhaps enough of an improvement to lure deserters away from main rival Firefox, which according to our stats now holds around a 17% share of users. And certainly not enough to lure us back from our current favourites Opera and Firefox.