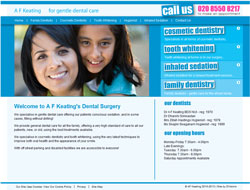 We are pleased to announce the launch of a new website for Dr AF Keating, a dentist based in Gants Hill, Ilford. 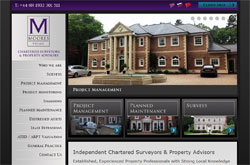 Moores Independent Chartered Surveyors have launched a new website for their Weybridge office. Moores Prime is a local, family run practice specialising in prime real estate across London and Surrey.

Google what? Penguin 2.0, that's what! Penguin 2.0 is a major algorithm update that was rolled out (or at least announced) by Google on 25th May.

Over recent years Google has tended to give major updates to its ranking algorithm a codename. This can be useful sometimes, as it gives us SEOs something tangible we can point at when explaining to clients why their rankings have just plummeted... Um, I'm only joking a little bit about that. Algorithm updates can have an impact in days, but it can take weeks to re-optimise and recover any lost ground, and in that time we can feel somwhat unfairly persecuted.

But sometimes we can also give ourselves a bit of a pat on the back, and Penguin 2.0 is one of those rare times. In fact we feel quite justified in giving ourselves a double pat on the back, as not only did the first Penguin update (now Penguin 1.0) have little negative effect on our client sites, Penguin 2.0 has by and large seen improvements to positions on nearly all our sites.

You might say "but you didn't do anything to make those improvements, it was simply an algorithm update", to which my reply is, "au contraire, it's because we have consistently focused on ethical and best practices in SEO that our sites have not only not been negatively affected, but in many cases have seen improvements".

Time to be smug for a few minutes. Only a few, mind, as we know that the next update could be a touch of what Google giveth, Google can take away...

But it's good to see that two of the most recent major updates have reinforced the need for the real SEO, with good content and proper structure that we provide, and that the quick fixes of link buying and content marketing are taking another hit.

Eighteen months after the public launch of Local Building Surveyors, we are very pleased to announce the launch of stage two of the LBS business development programme. The new site is visually very similar to the original, but behind the scenes has had a significant platform upgrade linking the custom lead generation system to the Joomla CMS to create a new infrastructure with with significantly more expandability, the first block of which is the addition of a new surveyor directory.

Also in the new release is some general smoothing of the signup wizards, some usability improvements to the administration areas, and the first steps towards a user dashboard.

From time to time, as the web moves on, it's sometimes time to refresh a site. One of those we have recently given a "wash and brush up" to is Fotoflite - www.fotoflite.com

The site was originally designed at a time when a significant proportion of web users were still using monitors with 800x600 resolution screens (amazingly not that long ago!). Viewed on the current generation of screen, the old site was looking too small, and frankly a little bit dated in other areas.

The solution was a simple re-templating  job - to create new templates from the original design artwork to better fit the larger 1024x768+ standard screens current today. At the same time some simple refinements were made to give it a slightly more modern feel, and all without the need to make any major changes to the underlying system or database. Quite a relief, as this is quite probably the largest Joomla / Virtuemart implementation in the world, with over 400,000 product records!