After nearly three years of development, the latest Joomla version, v1.6, was released in January. Having been through several version updates since initially Mambo, then Joomla 1.0 and then 1.5, experience has taught us to be cautious of jumping too quickly into early adoption of major new software versions.

This is for a number of reasons. Even after months of Alpha, Beta and "RC" testing, inevitably some bugs and flaws materialise once developers start to use the new software for real applications; and many of the third party component developers may not yet have released fully stable versions of add-in components.

Because of this we are adopting the following strategy for the implementation of Joomla 1.6:

The choice of which system we use for a particular site will be dependent upon the "best" option for the particular site: for preference it will be using the new 1.6 version, but if the components to delivery the required functionality are not yet available or stable, we may be  forced to use the 1.5 version. As we know from our experience of the 1.5 launch, once the new final release version is released, the component developers very quickly upgrade their software to suit, so in practice means this probably means that 1.6 will be the version of choice for pretty much everything going forward!

Joomla v1.5 is a solid and stable package with excellent functionality, so for existing sites we will not be recommending any sort of automatic migration from 1.5 to 1.6 unless there is any particular requirement to modify the site functionality. Upward migration is quite a significant task, and as long as sites running on the the current 1.5 version are stable and secure there is no obvious reason to go through the extra expense of the switch.

If at a later stage site changes are planned, then we will be offering upgrades as part of that process where appropriate.

As regards ongoing support, Joomla 1.5 remains fully supported by the development team until at least April 2012.

We have changed our Email Service Provider to Mail Chimp

After months of testing different systems we have finally taken the step of switching to Mail Chimp for our e-mail marketing needs, both for ourselves and our clients.

In the past we have used a combination of using the Acajoom component installed on our websites, together with hosted email provider Campaigner, but over the last year the cost of new licences for Acajoom has increased, and we felt that Campaigner has lost something of its competitive edge in both features and pricing and no longer fully met the needs of our clients

After trialling several different systems, including Aweber, iContact, Constant Contact, and Big Response (amongst others) we came to the conclusion that Mail Chimp offered the best value offering a great combination of pricing, features, usability, flexibility, and technical advance with the integration of new social media tools.

Want to see how autoresponders work? Try signing up on the left to receive our Free Hints and Tips...

Web form spam has been an increasing problem over the last couple of years, and in particular has been a problem for VirtueMart 1.1.x which features an "Ask about this product" enquiry form. Sites may have hundreds, or even thousands of product pages, so this form has been something of a big fat target for the form spam bots that inject spam messages through them.

Over the last few months we have tested a range of different anti spam solutions, with varying degrees of success. The security tools built into sh404SEF offer some protection, but the most effective been various captcha type plug ins. We have tested both image based captcha systems and mathematical types, and the clear winner for us has been EasyCalcCheck PLUS.

We have found the image based captchas have been far more susceptible to being bypassed or cracked, but where EasyCalcCheck PLUS has been deployed, spam has been very effectively stopped. It has a number of significant plus points over image captcha: legibility and no reliance on images being available being two. Additionally, it works well on all the core system components, plus a wide range of the most common additional components, including VirtueMart, so we are now making it a standard part of our installations. 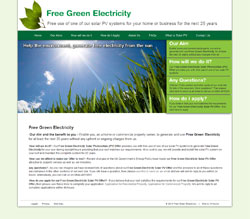 Free Green Electricity Corporation is a new company taking advantage of the latest government strategies in the development of electricity micro-generation installation.

The company provides for free installation and maintenance of PV (photovoltaic) solar panels for residential and commercial properties. The property owner gets the benefit of free solar energy for 25 years with no upfront or maintenance costs to worry about, with any surplus fed back into the National Grid.

The site is a custom design and is based on the Joomla CMS. 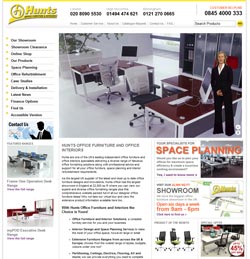 DVisions has been appointed to handle the online marketing for leading office furniture supplier Hunts Office Furniture and Interiors.

The project involves management of the company's paid search programme, together with a full programme of search engine optimisation.

Hunts are one of the UK’s leading independent office furniture and office interiors specialists delivering a diverse range of office furnishing solutions along with professional advice and support. As the largest UK supplier of the latest and most up to date office furniture designs and innovations, Hunts has the largest showroom in England at 22,000 sq ft.